No one was concerned with the realism in Miss Congeniality. I guess astrophysicists pay more attention to detail than do beauty queens. We loved the movie but there has been quite a bit of talk about the scientific inaccuracies. We’ll let you in on what the scientists are complaining about. 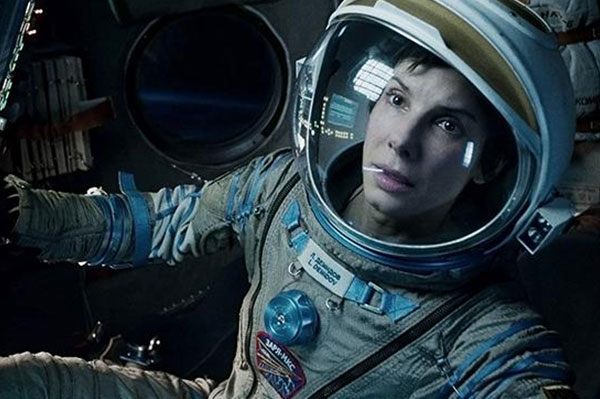 Sandra Bullock is wonderful, so it stands to reason that Sandra Bullock in space would still be wonderful. Alfonso Cuarón’s Gravity is a phenomenal film that celebrates the human spirit. The performances are compelling, and the story is gripping. You may or may not find yourself bawling into your popcorn; we wouldn’t know anything about that. Ahem. The movie has been praised both by critics and audiences for being a beautiful film that is brilliantly executed. It has broken box office records for October and stars Sandra Bullock and George Clooney.

As this is a fictional story, and space merely serves as location/metaphor, the science gets a little shaky. The space and science communities have been buzzing with critiques and comments concerning the accuracy of the film. The most entertaining criticisms have been courtesy of astrophysicist and Hayden Planetarium director, Neil deGrasse Tyson, who offered scientific corrections in 140 characters or less. Some of his tweets explained factual inaccuracies; others were a little lighter, including the suggestions.

Here are a few of the big inaccuracies in the film

The Hubble Telescope, International Space Station, and a Chinese space station could never be in sight of one another

Spoiler alert: Seeing these stations is a pretty crucial part of the plot. This one obviously didn’t bother us during the initial viewing, but we can imagine many astronauts and NASA employees had to suspend their disbelief right off the top.

Sandra’s hair should have floated

Apparently when in zero gravity, Sandy’s hair would have been a hot mess. While this might be a technical inaccuracy, it’s not hard to imagine why it was ignored. It would have been extremely hard to orchestrate a head of floating hair at all, let alone one that wouldn’t be too distracting or unflattering.

Why would an astronaut explain oxygen deprivation to a medical doctor?

This was the first thought we had after our tears had dried and we began to think critically about the story. It seemed kind of weird that a medical doctor was needed to install anything in space and that an astronaut couldn’t be trained to do it, but that this same medical doctor would need an explanation about how losing oxygen affects the human body was odd. Apparently Neil agrees with us.

As eager as the space community was to dialogue about their knowledge set, many astronauts have praised the film for its ability to simulate the space experience. 3-D is so often superfluous, but in this film it seems to legitimately enhance without distracting. After Tyson’s critical tweets went viral, he posted an open letter on Facebook commending the film for the many things it got right. Our own star Canadian astronaut, Chris Hadfield, saw the film at TIFF this year and loved it. His thoughts pretty much sum up our feelings too. “The visuals are spectacularly good in this film. I don’t understand how (Cuarón) did that. If I were to ever fly in space again, I want to fly with Sandra…”

What do you think? Do the inaccuracies make this movie less amazing or do you even care about floating hair?

Fifty shades of flaky: Charlie Hunnam will not play Christian Grey
October 2013 movie releases
10 Movie gadgets we want to own