This is all just so exciting! Halle Berry gave birth just this Saturday but is already gearing up for an amazing role in Steven Spielberg’s CBS drama series, Extant. 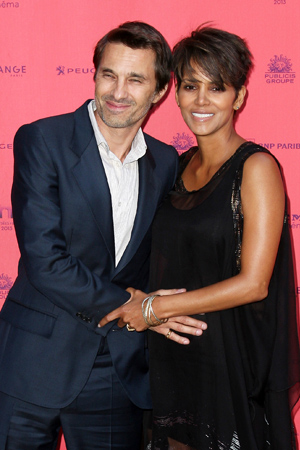 This Oscar winner is not wasting any time, we’ll tell ya that!

Halle Berry and husband, Olivier Martinez, welcomed a baby boy at the Cedars Sinai Hospital in Los Angeles just this Saturday, but the 47-year-old actress already has an upcoming project under her belt.

This is Berry’s first child with Martinez, but the actress also has a five-year-old daughter Nahla with ex-boyfriend Gabriel Aubry. The baby’s name is yet to be revealed.

Halle Berry will get married this weekend! >>

Berry’s career is not slowing down any time soon though. The actress recently signed on to star in Steven Spielberg’s new serialized drama, Extant. We know what you’re thinking: Spielberg and Berry — a match made in TV heaven.

“I’m always on the lookout for amazing roles and when you see material that contains this strong of auspices, nuance and complexity it compels me to run toward it no matter the medium. For five months a year I’ll get to live with and play this incredibly intelligent and vulnerable woman, and for the remainder of the year I’ll continue to look for other roles that move me as deeply as this one,” the actress said in a statement. “I’ve found amazing partners in CBS’s Nina Tassler and Les Moonves, and the incredible Steven Spielberg, along with his Amblin production team, whose vision and creativity in storytelling is unparalleled.”

So, here’s the story: Berry will play an astronaut who comes back home after a yearlong lone mission in space. She attempts to reintegrate back into society and reconnect with her family whilst also battling her memories of the space mission. Pretty heavy stuff, eh?

Halle Berry to paparazzi: “Our children should be off limits” >>

We have a deep-seated fear that astronauts are the new vampires of Hollywood, considering the widespread success of Gravity (although it is well deserved). We just hope this is not a beginning of a spaceman trend. Other than that, we would love to see Berry inhabit a more fast-paced and on-demand environment that TV series require. And with Spielberg at the helm of the project? This should be great!

“There’s only one Halle Berry and we are incredibly honored that she has chosen Extant to expand her illustrious career,” the famed director stated. “As she does with everything she touches, she will bring a deep authenticity to her role and I very much look forward to working with her.”

We wholeheartedly congratulate Berry and Martinez with the arrival of their son. We also send a side-note congrats to the actress with on her new role. Are you excited to see Berry on Extant?

Gwyneth Paltrow joins Instagram; who else should you follow?
Julianne Moore received a Hollywood star, but who hasn’t?
Celebrate curves: Jennifer Lawrence, Christina Hendricks and more!