Lorde is sure making headlines lately, for mostly good reasons! The songstress has beaten another record to become the third youngest person ever to top the Billboard chart. 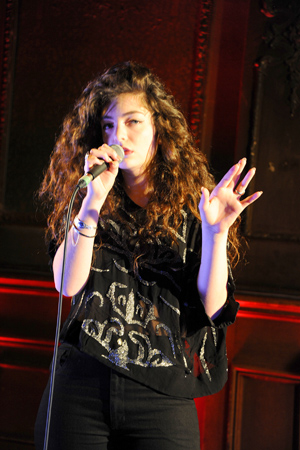 The 16-year-old songstress grabbed the number one spot on Billboard‘s “Hot 100” chart with her single “Royals,” becoming the youngest person to do so in the past 26 years! Not too shabby for a newcomer!

Lorde climbed her way to the top this week, dropping Katy Perry’s “Roar” to second place and Miley Cyrus’ single “Wrecking Ball” to third. Did we mention she’s only 16-years-old?

The last person to hold the honour was Tiffany — who was also 16 years old at the time — back in 1987 with her hit song “I Think We’re Alone Now.” Lorde is now the third youngest artist to ever reach the top of the Billboard chart; the second place is held by Little Peggy, who reached number one at 15-years-old with her song “I Will Follow Him” in 1963. The youngest person to ever grab the top spot is the legendary Stevie Wonder, who was only 13-years-old when his “Fingertips – Part 2” soared up to number one in 1963.

This is not the first record Lorde has set in her blossoming career; recently the singer became the first female to reach the top spot on Billboard’s “Alternative Songs” chart in 17 years! Can you imagine what she will achieve in the next five years?

Lorde’s first album Pure Heroine was released on September 27. If you haven’t picked up a copy, we highly recommend it!

We appreciate Lorde’s accessibility and down-to-earth-ness. We think it played a big part in her success, since fans can actually relate to this girl. Perhaps, she will be one of the few redeeming artists of this young generation. What do you think?