Rihanna angered an entire arena of fans when she arrived a shocking 80 minutes late to a concert in Adelaide, Australia. The singer did not offer an apology. 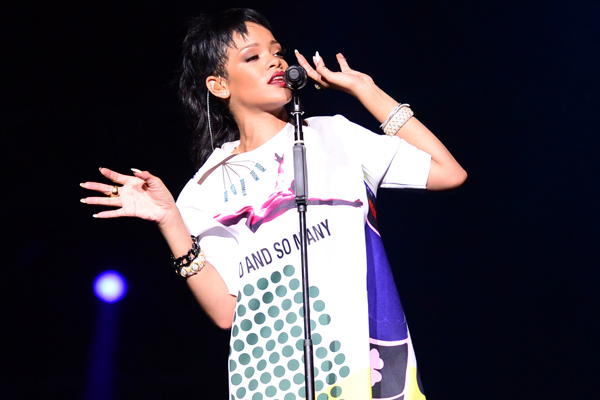 Rihanna has taken a note out of the Justin Bieber book of punctuality and arrived 80 minutes late to her concert at the Adelaide Entertainment Centre in Adelaide, Australia, on Saturday. She was received by a hurricane of boos from the indignant audience.

The 25-year-old singer flew in from Perth — where she was also reportedly 40 minutes late to her show on Tuesday — and managed a short statement during the booing, before sinking into her performance. No apology or explanation was offered.

“Adelaide what the f***. . . I’m finally here. . . And I now remember how crazy my Australian fans are,” Rihanna told the crowd.

While the singer may not have publically acknowledged her tardiness, plenty of fans vented on Twitter about the star’s unprofessional conduct.

#whilewaitingforrihanna I auditioned for X Factor, won it, became a pop star myself and turned up late to my own concert.

Rihanna didn’t seem too bothered by the audience’s response and even thanked them in a quick tweet, without a single allusion to her late arrival. Now, there’s pride, right there!

Justin Bieber suffered a similar fate when he arrived 40 minutes late to his concert and was met by a booing crowd of rowdy pre-teens and their parents at the O2 Arena in London, back in March.

Beyoncé also faced some backlash for showing up 20 minutes late to her performance at the V Festival in England in August, leaving her audience waiting in the pouring rain and high winds.

When will people learn? There is no such thing as fashionably late, especially when there is a chance of facing an angry mob.

Katy Perry plans to be “more of a Joni Mitchell” on next album
Are you ready for Madonna’s revolution?
Nicki Minaj is the only female earner on Forbes top Hip-Hop list