Taylor Swift is returning to the acting world in an adaptation of Lois Lowry’s novel The Giver, also starring Meryl Streep, Katie Holmes and Jeff Bridges. 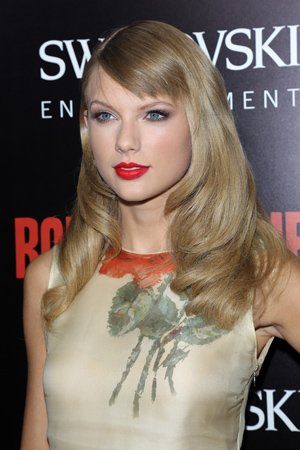 Well, it turns out the right script was not too far off after all.

Just a few weeks after musing on the idea of giving acting another go, Taylor Swift has landed a supporting role in the upcoming film adaptation of Lois Lowry’s novel The Giver.

The 23-year-old singer is joining an already stellar cast — which includes Meryl Streep, Katie Holmes, Jeff Bridges, Brenton Thwaites and Alexander Skarsgard — to play a yet-to-be announced character. The children’s novel tells the story of a young boy, Jonas (played by Thwaites), who lives in a seemingly utopian society and is chosen to be the “Receiver of Memory” under the tutelage of “The Giver” (portrayed by Bridges), but soon begins to question the balance of community.

The adaptation will be directed by Phil Noyce, whose previous work includes the 2010 film Salt, and be produced by Jeff Bridges, Nikki Silver and Neil Konigsberg. Shooting is scheduled to begin on Oct. 7 in Cape Town, South Africa, and the film should be ready for theatres by August 2014.

This year (as all previous years in cinematic history) is full of adaptations. Romeo and Juliet is given another go in a brand new adaptation starring Hailee Steinfeld and Douglas Booth as the ill-fated lovers. Gossip Girl’s Ed Westwick makes an appearance as Juliet’s cousin, Tybalt. This bad boy is scheduled to hit theatres on Oct. 11, so check it out! Oh, Shakespeare. . .providing movie material for all eternity.

Taylor Swift gets distracted by her cat during concerts >>

Joe Hill’s fantasy novel Horns has also been adapted for the big screen and recently premiered at the Toronto International Film Festival. The rather unusual story of a man named Ig Perrish, who wakes up with horn-like protrusions growing out of his forehead, which give him supernatural powers to force people to reveal their deepest secrets. The lead role has been taken on by the wonderful Harry Potter actor, Daniel Radcliffe. It’s actually a pretty exciting role to see Radcliffe take on! The film is scheduled for wide release some time next year.

The most anticipated film adaptation of the year must be The Hunger Games: Catching Fire, starring Jennifer Lawrence as the now-famed defiant, bow-bearing protagonist of the book series. This year the second instalment of the franchise is bigger, badder and twice as amazing (so we hear, at least). You can join the rebellion when the movie hits theatres on Nov. 22.

Are you excited to see Swift acting again? Any film adaptations you’re keeping an eye out for?