Carey Mulligan has been sporting very light locks of late, but the actress showed up to the premiere of Inside Llewyn Davis with very much brunette hair. 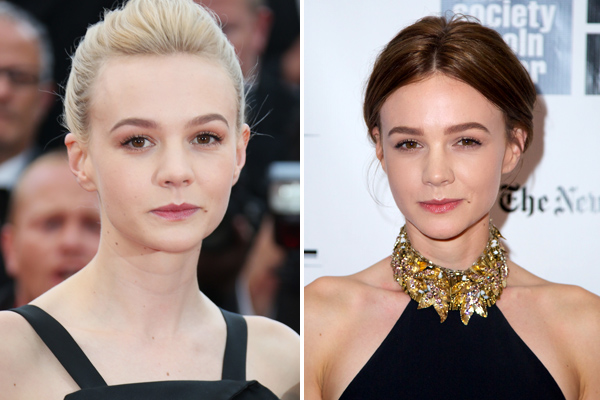 Of course, we must warn you that we are incredibly biased when it comes to Carey Mulligan, for she can do no wrong — it’s this close to being a scientific fact.

The endlessly adorable 28-year-old actress hit the red carpet for the premiere of Inside Llewyn Davis on Saturday sporting dark brunette locks instead of the blond wisps we’ve grown accustomed to of late.

The actress went with a darker shade for the filming of Inside Llewyn Davis in 2012 but then reverted to blond, and now she is a brunette again. Strangely enough, she is actually a natural brunette, although with all this switching back and forth, it’s easy to forget.

Mulligan is one of a handful of actresses who can make an effortless switch between blond and brunette hair. Reese Witherspoon has gone over to the dark side on several occasions, most notably for her role as June Carter in Walk the Line (for which she received an Oscar!). Jennifer Lawrence is another actress who inconspicuously transitions from blonde to brunette for her ongoing role as Katniss Everdeen in the Hunger Games franchise — she looks amazing every time.

If you’d like to catch Mulligan rocking her dark hair, keep an eye out for Inside Llewyn Davis, which hits theatres on Dec. 6. The film follows young folk singer Llewyn Davis (played by Oscar Isaac) as he attempts to gain recognition in the New York City music scene in 1961.

Now tell us: Do you like Mulligan better as a blonde or as a brunette? Do you have a favourite blonde-to-brunette (or vice versa) chameleon celebrity?