Katy Perry reveals that after the release of her album, Prism, she plans to dive into a more Joni Mitchell sound on her next record but will not abandon pop completely. 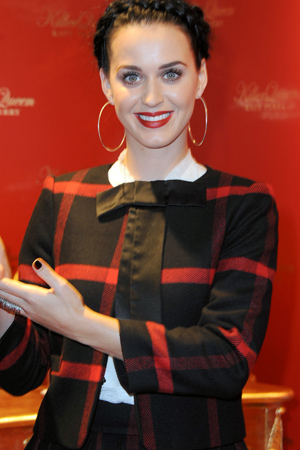 This just goes to show you that you shouldn’t be judging pop stars; they may surprise you!

Katy Perry has perched her pretty self atop the cover of the Oct. 5 edition of Billboard in support of her highly anticipated new album, Prism. And while her upcoming record received the majority of attention during the cover story interview (understandably), it was actually the talk of her next, next album that really caught our eye.

“Honestly, I’m just masquerading as a pop star,” Perry told Billboard. “I’ll probably turn into more of a Joni Mitchell. As I inch towards my 30s, I think my fourth record will be more of an acoustic guitar album.

“That’s where I started when I was first discovered by Glen Ballard and got my first record deal. We’ll see — I can’t get ahead of myself. I’m still doing the work: I’m a good balance of left and right brain, and to be an artist with a long career, you’ve got to have both. One thing John [Mayer] said to me was, ‘It’s harder maintaining success than finding it.’ I’ve got a few records under my belt, and I still feel like a brand-new artist. People still want that truth to cut through.”

Surprised? It’s hard to believe that behind the candy-sweet choruses of Perry’s songs lays an aspiring folk artist, no? But it is true, when the 28-year-old singer first started out, it was just her, a guitar and her voice.

Katy Perry on fitness and feeling her best >>

It would be difficult for Perry to stay afloat in the charts if she converts to the folk genre, which is why she mentions balance. The Billboard charts are dominated by pop, and, instead of going against the current, the singer is clearly strategizing to combine both. We think this would allow Katy to add more personality to her next record while also continuing making music in the genre that made her famous. Smart woman!

Prism will hit stores on Oct. 22. Keep an eye out!

Do you think Perry can pull off a Joni Mitchell-type of record? Before you answer, check out her acoustic performance of “The One That Got Away” at X Factor a few years ago.

Are you ready for Madonna’s revolution?
Nicki Minaj is the only female earner on Forbes top Hip-Hop list
The National’s song for Hunger Games “too dark”