This is not the publicity you’d want! Elizabeth Hurley is in trouble with animal rights groups after she confessed that her dogs kill foxes on her property. 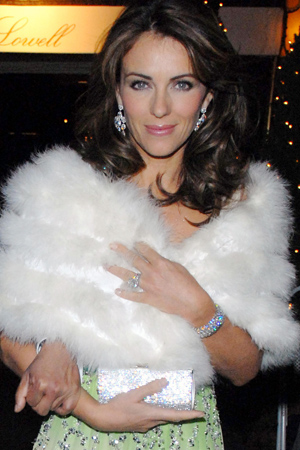 We never support any animal cruelty; so perhaps a bit of public shaming will do this actress some good!

Elizabeth Hurley is getting some heat from animal rights activists after revealing to Sky News that her three “naughty” Labradors run wild on her English Herefordshire property, forming a “vicious little pack” and killing innocent foxes (and possibly terrorizing sheep!).

Cue public outrage. The People for the Ethical Treatment of Animals (PETA) immediately jumped on the case questioning Hurley’s merits as a dog owner and reciting her history of fur wearing — which, in fact, is extensive. She loves her fur.

“Liz is a predator herself, who butchers the piglets and lambs she names and raises and also blithely steals the fur of animals who have been confined to tiny cages before being skinned, so it’s hardly surprising that she apparently takes no pains to stop her dogs from tearing foxes apart, dismissing the behavior as ‘naughty,’” a spokeswoman for the organization told E! News. “Of course, foxes have the very same capacity to feel pain and suffer as any animal.”

Oh, PETA. They always paint a vivid picture, no? Of course, there is no excuse for such careless dismissal of a pet’s behaviour! Hurley’s three Labradors kill foxes, which pose no threat to the actress’ property or to the actress herself. It’s unacceptable.

“Anyone with dogs liable to attack wild animals would do well to attend training classes or muzzle them,” Animal Aid told the Daily Express in response to Hurley’s statements.

Should owners be held accountable for the wild animals on their properties and the slaughter of such at the hands of their pets? Should Hurley be forced to attend training sessions with her dogs to keep them at bay? Sadly, animal rights are such a grey area in the realm of law, we’re not quite sure what can be done, other than scolding. What do you think?