Not these two as well! Richard Gere and wife, Carey Lowell, have separated after 11 years of marriage, joining the ranks of other celebrity couples. 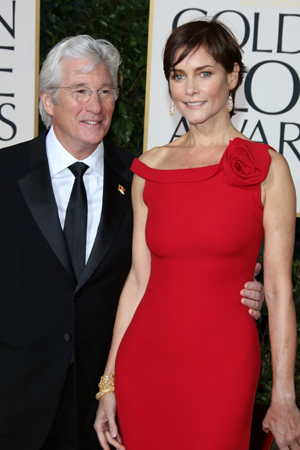 You just can’t put your faith in celebrity relationships anymore (or ever)! According to a People magazine report, Richard Gere and his wife, Carey Lowell, have separated after 11 years of marriage.

According to the report, Gere and Lowell are planning to file for divorce, but the 62-year-old actor’s rep has refused to comment on the relationship. The couple married in 2002 and have a 13-year-old son, Homer, together. Gere was previously married to supermodel Cindy Crawford, but the couple divorced in 1995.

What’s going on? If you can’t even trust beautiful, famous people to have proper relationships, what can you trust?

This year has not been particularly kind to celebrity couples. Recently, we’ve all been hit by the devastation that was the Michael Douglas and Catherine Zeta-Jones separation. That was rough. These two have been married for 13 years and have two children.

Then there was the Clint and Dina Eastwood separation, which was coincidentally announced in August, just like the Douglas-Zeta-Jones extravaganza. The Eastwoods have been married for 17 years and have a daughter together.

Taylor Swift and Conor Kennedy are no more >>

And finally, we know they were never married but. . . the Miley Cyrus and Liam Hemsworth breakup. This one is particularly painful for the younger generations. The couple met on the set of The Last Song in 2009, were engaged in 2012 and broke up in September 2013. The cause of the breakup has not been disclosed, but we’ve been assured that it was not due to Miley’s extensive twerking routines.

We know that it’s rather depressing to be reminded of the fragility of human relationships, so we’ve decided to cheer you up. Greatest celebrity relationship of all time — Goldie Hawn and Kurt Russell have been together for 30 years and are still going strong. There you go: there is hope after all!