Madonna is no stranger to censorship, a fact that makes this project all the more poignant. The singer screened a short film, secretprojectrevolution, for her Art of Freedom campaign. 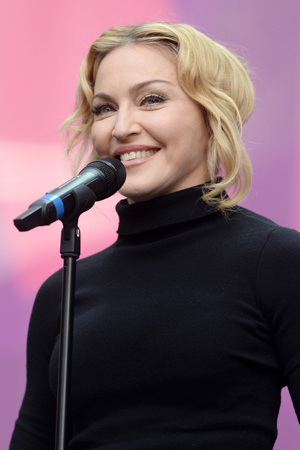 In case you’ve been plagued by insatiable wonder about Madonna’s recent activities or even intrigued by her cryptic allusions to this evasive “secretprojectrevolution” — the answer has finally arrived.

The pop queen premiered a short film secretprojectrevolution (very aptly titled, no?) on Tuesday evening in Manhattan, as part of her Art for Freedom campaign, before uploading it online for the world to see.

The 17-minute film, a collaborative effort with director Steven Klein, was shot entirely in black and white and starts off with Madonna being dragged into a jail cell for implied obscenity. The film continues with Gothic-esque imagery, dancing and voice-overs by the singer outlining injustice and bigotry towards freedom across the globe.

“This film, aside from my children, is to me the most important thing I’ve ever done,” Madonna told the audience at the premiere. “The idea of being free, and being able to express myself, not only as an artist but as a human being, is extremely important, and I do not take my freedom for granted. And it seems to me, when I travel around the world, that people are either not free and are fighting for it, or are free and taking it for granted. And both of those situations make me extremely agitated.”

The first screening at the Gagosian Gallery in New York was attended by many a celebrity like Anderson Cooper, Lucy Liu, Lindsay Lohan, Donna Karan, Zachary Quinto and even Madonna’s ex-husband, Sean Penn.

We obviously support the idea of artistic freedom, and we applaud Madonna for using her celebrity status to promote the notion. The film was an interesting way of reaching out to the public and is available for download on the campaign’s website.

But is it possible? While the idea is rather pleasant to dwell upon, can art ever be completely free? Or will it always be marred by prejudice and limitations of society? Let us know what you think and watch the short film below.