In the upcoming Rolling Stone magazine issue, Miley Cyrus challenges the criticism of her race misconception by naming the black artists she is friends with. 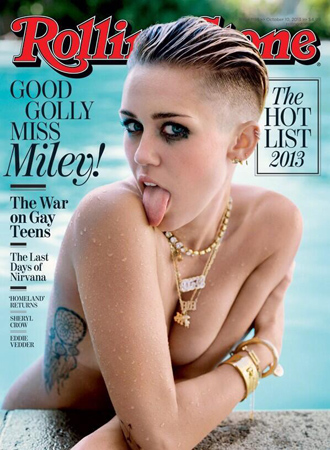 If you’re craving an inside look into the life of Miley Cyrus, starting off with the Oct. 8 issue of the Rolling Stone magazine will set you on your way. The 20-year-old songstress takes on a rather relatable and humane shape, despite currently being plagued by scandals and a massive breakup with fiancé, Liam Hemsworth.

Cyrus addressed all of the juicy bits of her recent performances early on in the interview — especially the particularly saucy set at the MTV VMAs — even admitting that she got a little too “handsy” with Robin Thicke and she would probably “never do that s***t again.” But what really caught our eye is that, amidst criticism of Cyrus having a skewed perception of American culture and race, the singer attempted to fire back at the claims by name-dropping her “homies”, who include Kanye West, Lil Kim and Pharrell Williams.

Cyrus admitted to Rolling Stone that West talked to her before the VMAs performance and gave her a major confidence boost.

“He came in and goes, ‘There are not a lot of artists I believe in more than you right now,'” she recalls. “The whole room went quiet. I was like, ‘Yo — can you say that again?!’”She laughs. “I just kept repeating that over and over in my mind, and it made me not nervous.”

The interview continued with, “After the show, Miley and Kanye met up at a Manhattan recording studio to work on a remix for his song ‘Black Skinhead.’ The next day he sent a text: “He said, ‘I still can’t quit thinking about your performance,'” Miley says. She also happened to mention that a pair of fur Céline slippers she’d bought were falling apart, and Kanye bought her five more pairs. “Kanye is the shit,” she says. “I kind of have a good relationship with him now. It’s good to have someone you can call and be like, ‘Yo, do you think I should wear this?’ ‘Do you think I should go in the studio with this guy?’ ‘Do you think this is cool?’ That’s what homies are supposed to do.”

Cyrus goes on to show the interviewer a long text message of encouragement from Pharrell (with whom she’s worked with on her new album, Bangerz) and a sweet short text from Lil Kim.

But does this in any way challenge the criticism of her perception of race in America? Cyrus has been previously quoted saying she likes “hood music,” but she is not “a white Nicki Minaj” in an August Billboard interview. Will the Rolling Stone statement only add fuel to the fire?

There is nothing wrong with race fusion or seeking inspiration within the culture of others, but the problem is that Miley is seemingly adopting the clichés of the hip-hop culture — whilst being an outsider — and broadcasting it through her interviews. When did Kanye West suddenly become a “homie” and what does that imply?

We love Miley, and her image works for her, but does it work for her audience? Let us know what you think!