Gwyneth Paltrow says she is very frank with her 9-year-old daughter, Apple, but claims that the Internet is forcing her to grow up faster than intended. 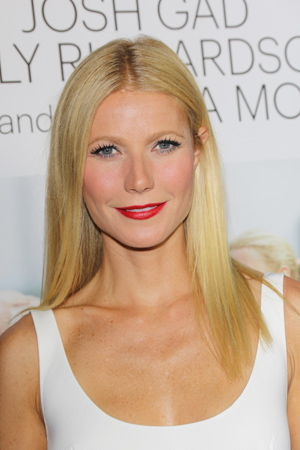 Gwyneth Paltrow revealed that her 9-year-old daughter, Apple, is starting to ask some very grownup questions, and the Internet may be partially to blame.

“She has such an incredible brain so she’ll ask me anything from what happens when our universe stops — what’s next?” Paltrow stated during the promotion of her new film, Thanks for Sharing. “She asks me about why bad things happen, if there’s a devil? Is God real or is it an energy?”

Sadly, little Apple doesn’t only pose questions of metaphysical nature; she has also shown curiosity toward a more sensitive subject of the sexual variety.

“The Internet is causing some of these conversations to happen earlier and earlier,” the 40-year-old actress said. “She was exposed to a little something — not anything too bad, thank goodness — but by a friend who has older brothers, and it’s too early. She’s only 9 and she’s an innocent 9, so we haven’t really gotten to it yet.”

But don’t worry, Paltrow simply asked her daughter to exercise caution on the Internet, because it’s a strange beast. . . even to adults.

“I just say, ‘There are things on the Internet that are really upsetting and even as a grownup they are too upsetting for me,'” she stated. “And if she has any questions please come to me, and she’ll never be in trouble but that the Internet is not safe.”

Paltrow has been married to Chris Martin since 2003 and the couple has two children together: Apple and Moses.

We’re glad to hear that Paltrow is guiding her daughter in a very positive and receptive manner; it should encourage Apple to seek her advice (hopefully!) more often. We also hope she stays this adorable forever!

Christina Aguilera feels sexy and confident at 32
The Game, Drake help woman who lost her children in fire
Zac Efron is “healthy, happy and not drinking” post-rehab