Beyoncé is having no luck with fans right now. The singer was pulled off stage in São Paulo, Brazil, by a very excited male fan. Don’t worry, she’s OK! 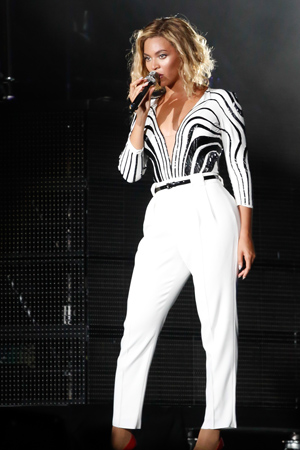 Well, this is why some people are cut out for show biz and others are not.

While performing at the Estádio do Morumbi in São Paulo, Brazil, on Sunday, Beyoncé was pulled off the stage by an overly eager fan — and she didn’t even lose her cool! This just goes on to prove that she is not a human after all.

The 32-year-old songstress continued belting out “Irreplaceable” during the mishap and while the bodyguards flew in to manage the fervent male fan. Per E! News, Beyoncé even approached the fan after the song to console him, shook his hand and said, “Nice to meet you. Thank you, I love you, too.”

Always graceful and professional this woman! How does she do it?

Beyoncé booed at the V Festival >>

Beyoncé is currently touring South America as part of her The Mrs. Carter World Tour. Her last run-in with a fan was far more literal and on our Canadian soil; the singer’s weave got caught in an on-stage mechanical fan during a performance in Montreal! Which one is worse?