Paul McCartney revealed the track listing for his sixteenth studio album, New, over the weekend. The album features collaborations with the best producers in the industry. 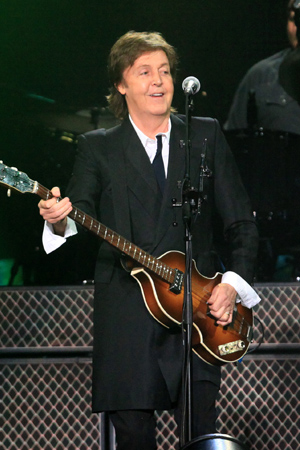 Nothing is quite as incredible as a new Paul McCartney record!

With a little less than a month before the release of his sixteenth studio album – aptly titled New – McCartney has published the track listing of his latest project on Friday.

This is a first all-new-material album for the 71-year-old rocker since the release of Memory Almost Full in 2007, and it features production by Mark Ronson, Paul Epwortn, Ethan John and Giles Martin.

“The original idea was to go to a couple of producers whose work I loved, to see who I got on with best — but it turned out I got on with all of them! We made something really different with each producer, so I couldn’t choose and ended up working with all four. We just had a good time in different ways,” McCartney stated on his official website.

“It’s funny, when I play people the album they’re surprised it’s me. A lot of the tracks are quite varied and not necessarily in a style you’d recognise as mine. I didn’t want it to all sound the same. I really enjoyed making this album. It’s always great to get a chance to get into the studio with a bunch of new songs and I was lucky to work with some very cool producers. We had a lot of fun.”

New is slated for release on Oct. 15, so mark it in those calendars! Here is the long-awaited track listing for this bound-to-be amazing album:

Check out the first single, “New,” from this record, and let us know what you think. Will you be picking up a copy?