Sinéad O’Connor is no stranger to the strange. Recently, the songstress showed off some new tattoos on her face of the initials “B” and “Q” inked in red. 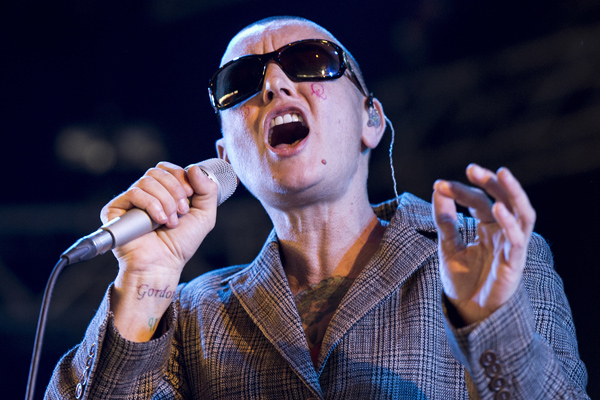 We did not see this coming!

The very talented Irish songstress Sinéad O’Connor has debuted some interesting new tattoos during her performance at Bestival 2013 on Friday in England.

And by “interesting,” we mean they’re on her face!

Selena Gomez got a new tattoo! >>

O’Connor is famous for thinking outside the box, but she still got us! The new ink features a “B” and “Q” tattooed in cursive red lettering on her cheeks.

“Brendan Quinlan.. ‘It’s what it is’.. Un ange passe ; ),” read the message on O’Connor’s website. “There’s a bottle of Agent Provocateur in someone’s room that Belongs to me.”

Per Ireland’s Independent, O’Connor chose to have the initials tattooed after “falling out with a man” and had them placed on her face as a reminder of the relationship. There has been no confirmation of whether the tattoos are permanent or not.

Harry and Taylor go to a tattoo parlour >>

We don’t know who Brendan Quinlan is or if he is indeed the inspiration for the tattoos, but he was clearly messing with the wrong woman! Regardless, it’s a unique way of expressing yourself for sure, but it rather suits Sinéad. So, power to you, girl! What do you think of the singer’s new ink?