Angelina Jolie is going to be honoured with the prestigious Jean Hersholt Humanitarian Award at the Academy’s 5th Annual Governors Awards. 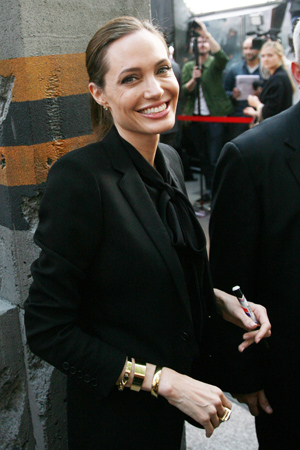 Finally there is an award worthy of her humanitarian efforts!

Angelina Jolie will be receiving the Jean Hersholt Humanitarian Award at the Academy’s 5th Annual Governors Awards on Saturday, November 16. How exciting is that?

The Jean Hersholt Humanitarian Award honours “an individual in the motion picture industry whose humanitarian efforts have brought credit to the industry,” and nobody fits the bill better than Jolie. The actress has spent nearly a decade as a Goodwill Ambassador for the United Nation High Commissioner for Refugees (UNHCR) and more recently has been a Special Envoy to the High Commissioner. Jolie travelled to the Syrian refugee camps in Jordan this summer and has spoken out about violence against children in the conflict.

“The Governors Awards pay tribute to individuals who’ve made indelible contributions in their respective fields,” said Academy President Cheryl Boone in a statement. “We couldn’t be more excited for this year’s honorees and look forward to bringing their peers and colleagues together to celebrate their extraordinary achievements.”

Several fellow stars will receive the Honorary Awards by the Board of Governors of the Academy of Motion Picture Arts and Sciences at the ceremony, including Steve Martin, Piero Tosi and Angela Lansbury. The ceremony will take place at the Ray Dolby ballroom at the Hollywood & Highland Center.

We congratulate Jolie and other recipients on their honours! We hope to see the actress continue her humanitarian work for many years to come.