Sue Sylvester for the win! Glee actress Jane Lynch was awarded a star on the Hollywood Walk of Fame on Wednesday for her work in film and television. 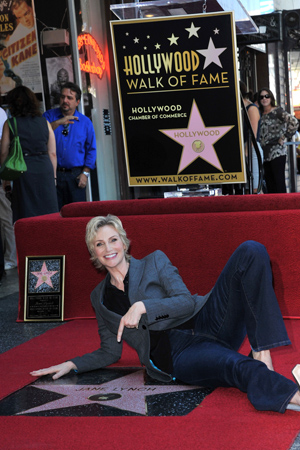 She is now officially a star, y’all!

Jane Lynch was honoured with the 2,505th star on the Hollywood Walk of Fame on Wednesday.

The 53-year-old actress is famous for her role as Sue Sylvester on Glee, but has appeared in various other television shows and films, including Talladega Nights: The Legend of Ricky Bobby and The 40-Year-Old Virgin.

“I am going to wake up in the middle of the night and say, ‘Ahh, I am a star!'” Lynch joked at the ceremony, adding, “In a way — this is going to sound snooty of me — I was like, ‘Of course,’ but in another way, it blows my mind.”

Jane Lynch and wife Lara are getting divorced! >>

The actress is currently filming an episode of Glee dealing with the death of the character Finn Hudson, who was played by the late Corey Monteith. The actor died of a heroin and alcohol overdose in July.

“Work is the best thing for grief,” Lynch said. “So we are working on this episode right now, the tribute to our quarterback, our Corey, who was not only quarterback of the football team, but of the Glee Club and I think it does him great justice.”

We’re sure whatever the folks at Glee will choose to do will be moving and meaningful. We congratulate Ms. Lynch on her newest achievement and hope to see more of her on the big or small screen!