Scarlett Johansson and her boyfriend, Romain Dauriac, are engaged as of last month, according to confirmed reports. The actress was spotted with the ring on the red carpet. 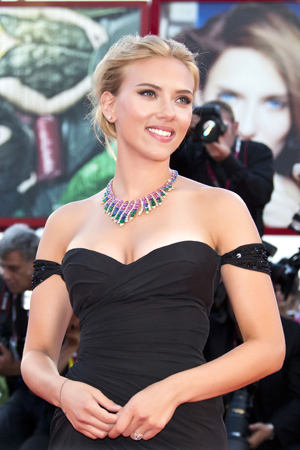 Do you hear that low humming sound? It’s the sound of millions of men and women weeping at the news of Scarlett Johanssen’s engagement!

Yes, indeed! According to People magazine, the 28-year-old actress is now betrothed to French journalist Romain Dauriac. The proposal took place approximately a month ago, when Dauriac offered her a vintage Art Deco-style ring.

“They’re engaged and very happy,” a source told the magazine.

The recently engaged couple attended the red carpet at the Venice Film Festival on Tuesday for the screening of Johansson’s newest film, Under the Skin. The actress was spotted wearing the ring.

The couple confirmed their relationship back in November 2012. Johansson was previously married to Ryan Reynolds, but their divorce was finalized by 2011.

The actress previously stated that she is not thinking of marriage at the moment and has no plans of having children soon either. Well, if she’s engaged right now, does that mean that the notion of babies is under consideration too?

Congrats to the newly engaged couple. We can’t wait to wiggle out more details on their wedding plans!