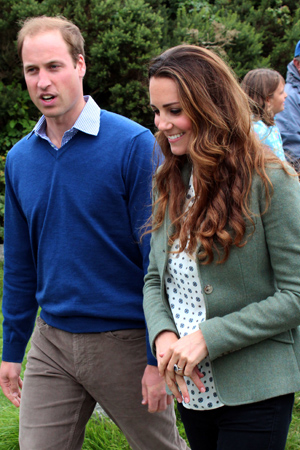 How incredibly sweet and respectful of this royal couple!

The Duke and the Duchess (avec baby) were reportedly spotted boarding a helicopter at the Belton Woods country club near the town of Grantham, headed over to Lady Sarah’s farmhouse six miles away.

Since Diana’s tragic death in 1997, Prince William has stayed in touch with Lady Sarah and the rest of his Spencer relatives. The Duke, the Duchess and Prince Harry even attended Lady Emily McCorquodale’s (Lady Sarah’s daughter) wedding just last year.

Prince Harry’s presence and whether the group was able to pay a last visit to Lady Diana’s shrine at Althorp, which officially closed on August 30, are facts that were not confirmed. The elaborate memorial erected by Earl Spencer will be demoted to a simple stone temple and column bearing her name come next spring.

Well, there you have it! We think it’s quite mindful of the new parents to introduce the little one to the Spencer side of his family and mark the day Princess Diana died.