Benedict Cumberbatch may actually be in everything! The actor is rumoured to have been cast in the new J.J. Abrams-directed Star Wars trilogy. 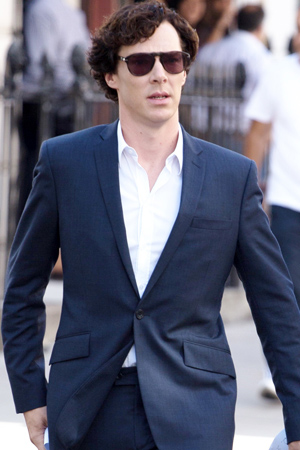 If he hasn’t nabbed enough roles for his blossoming career yet, this ought to do it!

Per Film Chronicles, Benedict Cumberbatch may have acquired a role of unknown proportions in the new Star Wars: Episode VII.

Cumberbatch has previously worked with the Star Wars director, J.J. Abrams, on Star Trek Into Darkness, so the news would not be all that surprising, but Lucasfilm has yet to confirm or deny the newest report.

If indeed cast in the film, the 37-year-old actor may have a chance to star with Harrison Ford, Carrie Fisher and Mark Hamill, who are reportedly reprising their roles from the original trilogy.

Rumours of Cumberbatch’s involvement in the new trilogy have been swirling around for a while, especially after the actor dropped out of Guillermo del Toro’s Crimson Peak — scheduled to start production at the same time as Star Wars. Coincidence? We certainly hope not.

While we wait for the confirmation or denial of this wonderful rumour, we may catch a glimpse of beautiful Mr. Cumberbatch in his many other projects like August: Osage County, 12 Years a Slave and The Fifth Estate.