Best news ever! Shania Twain revealed that she is not only making new music, but is currently looking a producer to put it all together! 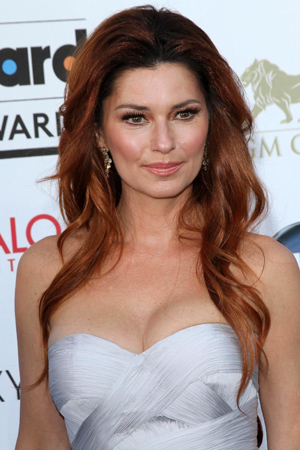 Oh-em-gee! We feel as giddy as little kids right before being served a fat slice of chocolate cake. . .

According to an interview with the Rolling Stone magazine, Shania Twain has sweet, sweet music lined up for her next album and is currently in the process of selecting the right producer.

“I’m pretty much there with my songs, I’m really just sitting on the fence in regards to a producer. So I’m listening to a lot of records, doing my homework there, and trying to determine who is the right match.”

When asked which music she currently loves, the 47-year-old responded, “This is last year, but I’m really stuck on Lana Del Rey. I’ve been listening to that one a lot more and kind of stuck on the sound of that record.”

Adding, “I really love Raising Sand as well—Alison Krauss and Robert Plant. So that goes to show you how lost I am as far as production direction, because I’m listening to such a broad spectrum.”

Lana Del Rey, a little surprising, no? We wonder if that will be an influence on her next record. The album Twain is currently putting together will be her first since 2002’s Up and is going to sound a little different.

“There are probably less upbeat songs. I would say it’s more half and half compared to what I’ve done in the past, where I would’ve leaned more towards mostly uptempo songs,” she told the interviewer.

“I do want it to be perfect, and I want it to be something that I really enjoy and a product of my inspiration…it’s been a long time.”

Twain also stated that it’s been more than ten years since her last album, that she has changed since then and that her music is changing with her.

“I’m different, I’ve evolved, and I want that to be reflected in the music. At the same time I don’t want to abandon the root of what I am.”