Ay! Michael Douglas and Catherine Zeta-Jones have decided to take a break and have separated indefinitely. . . after 13 years of marriage and two children. 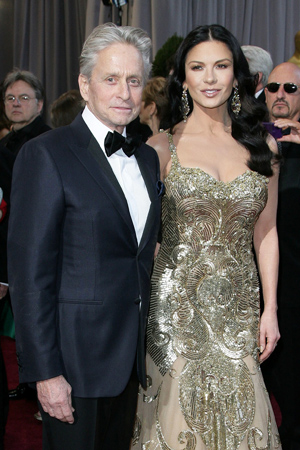 Can we throw a tantrum over this? Can we cry? What is the appropriate response?

Yes indeed. After 13 years of marriage, the couple has decided to take a break and haven’t been photographed together since April 22. They have since attended red carpets alone and even vacationed with their two children — 13-year-old Dylan and 10-year-old Carys — separately. Neither of them has filed for a divorce or a legal separation, yet.

“Catherine and Michael are taking some time apart to evaluate and work on their marriage,” Zeta-Jones’ rep said in a statement.

The reason for the split? Per People magazine, the couple has been under a lot of stress in the last few years, with Douglas fighting off throat cancer in 2010 and Zeta-Jones’ ongoing struggle with bipolar II disorder.

“The stress has taken a toll on their marriage,” a friend told People.

The couple wed in 2000 with a luxurious ceremony at Plaza Hotel in New York City. The wedding even carried numerous Welsh details like a traditional choir.

While it seems that the stars have gone out and the sun will never rise again, sources close to the couple say there is hope. The 68-year-old actor and Zeta-Jones, 43, are still hoping to work out their differences for the sake of their kids. We sure hope so as well!