Regardless of whether you’re a die-hard cinephile, an occasional movie fan or you fall somewhere in the middle, it’s hard to ignore the draw of The Toronto International Film Festival. Each September the bright light of Hollywood shines on the city, as hundreds of selected films are screened at this premier festival. 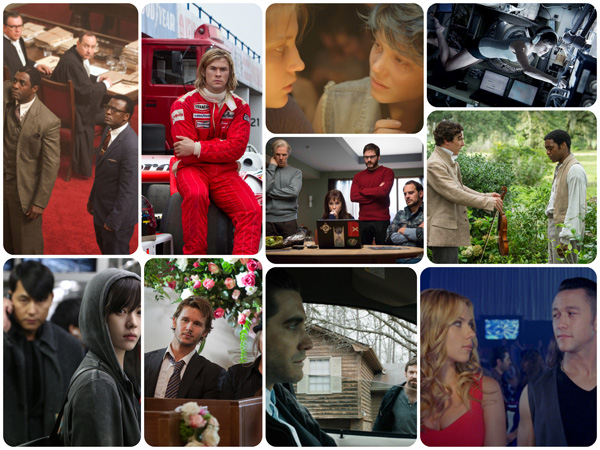 So what’s the buzz about this year? Here is a brief rundown of what we think could be some of the best films featured at TIFF 2013.

The 38th Annual Toronto International Film Festival‘s opening night selection is based on the headline story of WikiLeaks and its founder, Julian Assange. Director Bill Condon brings this powerful story to the big screen with a cast that includes Benedict Cumberbatch, Daniel Brühl, Laura Linney and Stanley Tucci.

In this thrill ride,  Academy Award–winning director Ron Howard gives us a cinematic flashback to the 1976 Formula One racing season, with all the glamour of the international jet-set crowd and the fierce competition between two young drivers. Chris Hemsworth, Daniel Brühl, Olivia Wilde and Alexandra Maria Lara star.

A missing child is one of a parent’s worst nightmares, and in this film, director Denis Villeneuve brings us a story of two families, two missing children, the investigation and a father who takes matters into his own hands. The stellar cast includes Hugh Jackman, Jake Gyllenhaal, Viola Davis and Terrence Howard.

Justin Chadwick directed this spirited biopic of the legendary Nelson Mandela based on Mandela’s autobiography, Long Walk to Freedom. This film, which takes us on a journey of his life, stars Idris Elba as Mandela and has a cast that includes Naomie Harris, Tony Kgoroge and Riaad Moosa.

Blue Is the Warmest Color

Winner of the coveted Palme d’Or award at this year’s Cannes Film Festival, director Abdellatif Kechiche’s film is an intimate exploration of love between two young women. Léa Seydoux and Adèle Exarchopoulos star as the female lovers in this French film.

Director Alfonso Cuarón takes us on a thrilling 3-D space adventure with this film starring Academy Award winners Sandra Bullock and George Clooney. Filmed with amazing 3-D effects, the much-anticipated film is about a space mission gone wrong and the relationship between the two lead characters as they deal with the crisis.

The Right Kind of Wrong

From director Jeremiah Chechik comes this fun film and a charming though somewhat offbeat look at the road to love. Set against the beautiful backdrop of scenic Banff, Alberta, the cast includes Ryan Kwanten, Sara Canning and Catherine O’Hara.

It’s Joseph Gordon-Levitt times three in this film, as he’s not only the star of the movie but the writer and director as well. This romantic comedy centres on the life of a womanizer with an obsession for adult films. A host of other stars round out the cast, including Scarlett Johansson, Julianne Moore and Tony Danza.

Director Steve McQueen brings us this fact-based film that tells the powerful and shocking story of a 19th century free man who was kidnapped and then sold into slavery. Chiwetel Ejiofor leads the talented cast, which includes Michael Fassbender, Benedict Cumberbatch, Paul Dano, Paul Giamatti, Alfre Woodard and Brad Pitt.

Cho Ui-seok and Kim Byung-seo are the directing duo behind this non-stop action-thriller about a special police surveillance unit that tries to bring down a criminal mastermind and his gang. Seol Kyung-gu, Jung Woo-sung, Han Hyo-joo, Lee Jun-ho, Jin Gyeong all star in this mesmerizing Korean film.

For more information and the complete list of films screened at the festival, visit tiff.net.

Lessons from the movies: What to do when technology attacks
Ben Affleck cast as Batman
Christian Bale nabbed the role of Moses