Warner Bros. have announced that Ben Affleck is all-aboard to star as Batman in the upcoming sequel to Zack Snyder’s Man of Steel, starring Henry Cavill. 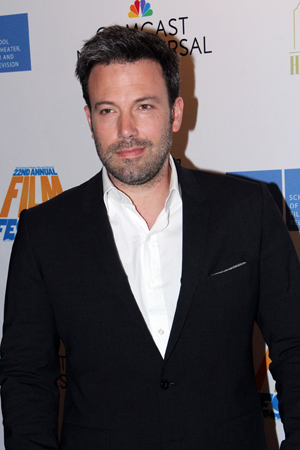 The thought of Ben Affleck in a unitard is strangely attractive, no?

Warner Bros. announced on Thursday that Affleck has been cast as Batman in the upcoming Zack Snyder-directed sequel to Man of Steel. Can we get a high five for the Justice League?

“We knew we needed an extraordinary actor to take on one of DC Comics’ most enduringly popular Super Heroes, and Ben Affleck certainly fits that bill, and then some,” Greg Silverman, president of creative development and worldwide production at Warner Bros., said in his statement on Warner Bros. official Facebook page. “His outstanding career is a testament to his talent and we know he and Zack will bring new dimension to the duality of this character.”

Snyder then chimed in with his own praise for the 41-year-old actor, “Ben provides an interesting counter-balance to Henry’s Superman. He has the acting chops to create a layered portrayal of a man who is older and wiser than Clark Kent and bears the scars of a seasoned crime fighter, but retain the charm that the world sees in billionaire Bruce Wayne. I can’t wait to work with him.”

This is not be the first time Affleck will be squeezing himself into superhero tights, he has previously appeared in Daredevil and as George Reeves (former Superman actor) in Hollywoodland.

The actor is currently in incredibly high demand, especially after picking up an Oscar for Best Picture for his film, Argo. Affleck has also been recently cast in David Fincher’s adaptation of Gillian Flynn’s novel, Gone Girl.

The production of the yet-unnamed Man of Steel sequel is set to start next year, with Henry Cavill, Amy Adams and Laurence Fishburne reprising their roles as Superman, Lois Lane and Perry White respectively. The film is scheduled to hit theatres on July 17, 2015.

So, Affleck as Batman, what’s your stance on that?