It’s not as bad as it sounds! Anna Kendrick admitted to getting drunk on the set of her new film, Drinking Buddies, when her non-alcoholic beer was switched for the real stuff! 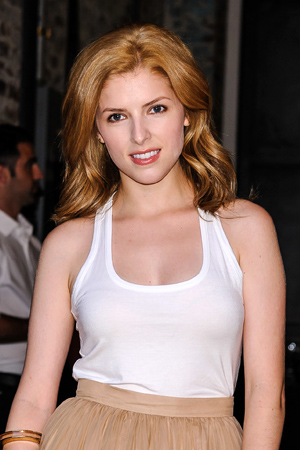 Call it devotion to the art of filmmaking.

Anna Kendrick revealed that she got drunk during the filming of her newest film, Drinking Buddies, but it was all for the betterment of the movie!

The film focuses on two co-workers, Kate (Olivia Wilde) and Luke (Jake Johnson), at a brewery in Chicago, who drink together and flirt endlessly, but are also in separate relationships. Kendrick plays Luke’s girlfriend, Jill. The Joe Swanberg film was unscripted; the actors were simply given an outline and had to improvise the rest. It turns out it’s easier to pretend to be drunk, if you’re actually drunk!

“It was very, very bizarre,” Kendrick told Vulture in a recent interview. “During a scene at the bar, they gave me fake beer, but then during a scene where I’m playing cards with Jake, they gave me real beer, and I didn’t realize it!”

“And so every time I lost, I was pounding beer, and I didn’t realize it was real until halfway through the take. I was like, I’m super drunk right now! And so as soon as the take was over, I had to announce to everybody that I was drunk at work. I was horrified by the idea that I was going to be the next troublesome star who got drunk and started flipping over tables or whatever. I just tried to sit quietly until I sobered up.”

The actress’ co-star Johnson commented on her drinking abilities in The Daily Beast in March, stating, “Anna is one of the bigger lightweights I’ve ever been around.”

Drinking Buddies hits theatres in limited release on Aug. 23. So, check it out if this sounds like your kind of beer — er, um — film!