The Country Music Association has chosen the hosts from the 2013 CMA Awards to be held in Nashville, and you will not believe who it is! 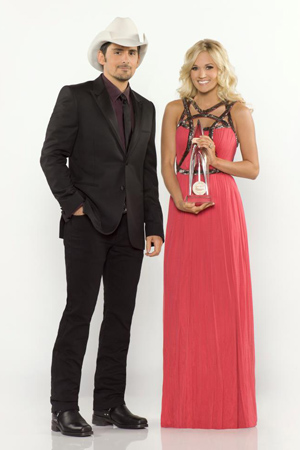 Guess who’s hosting this year’s CMA awards? It’s the most shocking, unprecedented choice ever made by the Country Music Association. . .

Wait, didn’t they host the show last year? That is correct. The pair is returning to host the CMA Awards for—wait for it—the sixth time in a row!

If it’s not broke, right? The announcement was made at the CMA Music Festival: Country’s Night to Rock on Monday evening, as usual.

Carrie Underwood: “I want to look and feel good” >>

“Carrie and Brad are the consummate hosts,” stated Ed Hardy, president of the CMA Board of Directors. “They have the respect of our industry, artistic credibility, critical acclaim, and a quick-witted, genuine rapport that makes them popular with our audience and the viewers at home. We are delighted to have them back as hosts for the sixth year.”

Is it upsetting to have the same hosts for the award show six years in a row? Not at all! This dynamic duo is always on-point, downright scandalously hilarious and one hundred per cent good-lookin’.

The CMA Awards will air from Bridgestone Arena in Nashville on Nov. 6.

Are you glad to see Paisley and Underwood return, or are you bored with the two? While you’re making up your mind, enjoy this hilarious intro from the 2010 CMA Awards.