We didn’t think this day would ever come. Sandra Oh, or Dr. Cristina Yang on 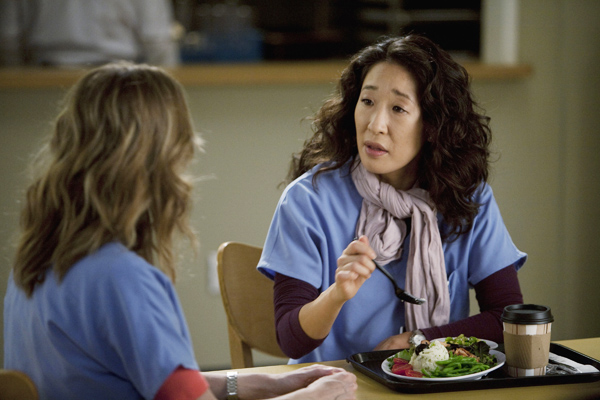 It’s time for Dr. Cristina Yang to depart the Seattle Grace Hospital (or rather the Grey Sloan Memorial Hospital).

Sandra Oh—best known for her role as Dr. Yang on Grey’s Anatomy—will be leaving the show after the upcoming 10th season.

Oh, these tears are real! The 42-year-old actress has been with the ABC series since it first premiered in 2005. How will anything be the same?

“It’s been a great privilege to play the character of Cristina Yang on GA and I am both sad and excited to see where this, her final season will take her,” Oh said in a statement.

“It was an emotional and deeply creative decision for me and I feel fully supported by Shonda [Rhimes] and the writers. It’s so rare in an actor’s life to be able to explore and grow a character so fully, so completely. I am profoundly grateful to everyone at GA for the opportunity. I’m excited to celebrate and cherish every moment of my final season on GA with the fans who have made it all possible.”

No word yet on how Oh’s character will inconspicuously leave Grace Hospital, but we hope it will not be with the help of some tragic demise like another plane crash. We’re still recovering from the first.

“One of the best days of my life as a writer happened the day Sandra Oh walked in my door to audition and forever changed the course of Grey’s Anatomy with her brilliant, nuanced portrayal of Cristina Yang,” Shonda Rhimes stated. “Over the past ten seasons, I have been made better by Sandra’s trust, faith and friendship and I can’t quantify how grateful I am for her collaboration on a character we both love so deeply. This year is going to be bittersweet for us—we’re both going to savor every moment of Cristina Yang and then we’re going to give her the exit she deserves. And when Sandra walks out of my door, Grey’s Anatomy will be once again be forever changed.”

Now, technically, the majority of Grey’s main cast will have to renew their contracts after season ten, so more actors may leave. Thus far, it’s just Oh.

There you have it. Pass the tissues around and grab a big spoon for some fudge ice cream. . . This may be the end of Grey’s Anatomy as we know it. Will you be tuning after Oh’s departure?