Angelina Jolie told the audience at the D23 fan convention that her role as Maleficent scares children, instead of enticing them as a Disney character. 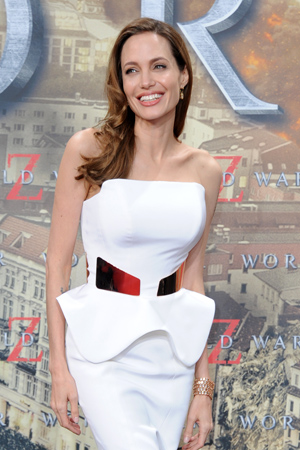 You’d think being a Disney character would make you a children’s favourite, but that’s not always the case. Just ask Angie!

Angelina Jolie revealed that she gave quite a scare to a number of kids whilst in character for Disney’s new take on the 1959 classic Sleeping Beauty, villainously titled Maleficent.

“The strange thing was people with little kids would visit the set, and I would think, ‘I’m a Disney character!’” the actress said at the D23 fan convention in Anaheim, California.

Angelina Jolie admits to having a double mastectomy >>

“I’d go over to the children and say hi,” Jolie continued. “And they would scream and run off. One little boy actually said ‘Mommy, please tell the mean witch to please stop talking to me.’”

It’s hard to believe that anyone would be frightened by Jolie (being overcome with beauty is more believable!), but judging from the photos circulating the web, she’s doing one heck of a convincing job as the famous villainess.

The only child unfazed by the actress in her Maleficent getup was her very own four-year-old daughter, Vivienne, who is playing the young version of Princess Aurora.

“She was the only four-year-old who wouldn’t scream,” Jolie stated.

The film is directed by Robert Stromberg and also stars Elle Fanning as the teenage Aurora. It’s currently slated for release on July 2, 2014.

We can’t wait for this flick to hit theatres! There’s something so incredibly enticing about Maleficent and this film aims to sympathise with her. What do you think?