Jennifer Aniston visited The Talk and discussed her workout routine for We’re the Millers, where she plays a stripper pretending to be a suburban mum. 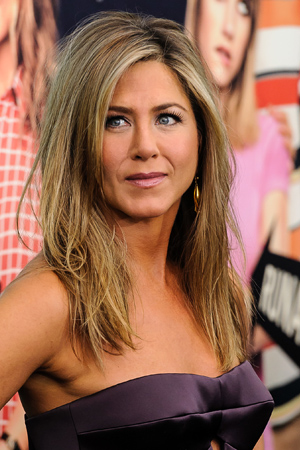 Jennifer Aniston is a gorgeous woman with the body of a Greek goddess, so we can’t really blame her for picking up the role of a stripper in her newest flick, We’re the Millers.

The 44-year-old actress dropped by The Talk on Wednesday to discuss her newest film and her experience training for the role.

Jennifer Aniston made a director cry >>

“I actually had also just come out, about two months prior, [of] having knee surgery. I was having to do these intense squats and, you know. . . the moves that you do when you’re stripping,” Aniston revealed.

Adding, “It was pretty intense—I had a knee brace on the whole time until I shot it.”

Aniston opted to hire a professional trainer to help her along and, apparently, he or she was an exercising maniac.

Jennifer Aniston had “so much fun” playing a stripper >>

“It was challenging—I did yoga and I worked out with this trainer that was an animal,” she told the hosts. “I was doing things [where] I was like, ‘I don’t want to do that ever again.'”

But look at the results! So, maybe We’re the Millers does not sit well with the critics, but Jennifer is a winner anyway. . . At least in our books.