It was bound to happen sometime! Prince William is back to work as a helicopter pilot in the Royal Air Force, after his two-week paternity leave ended. 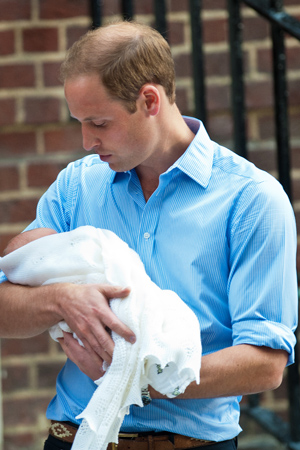 It was nice while it lasted, but Papa needs to get back to work!

The Duke of Cambridge reported for duty as a search-and-rescue helicopter pilot in the Royal Air Force in Anglesey, Wales. His first shift was scheduled for Wednesday.

Whilst the Duke is busy with the RAF, Kate Middleton is expected to remain at their Bucklebury residence, before making the move to Anmer Hall in Norfolk, which is conveniently located on Queen Elizabeth II’s Sandringham Estate. The Duchess will remain on the estate until renovations are complete at the royal couple’s Kensington Palace.

In other royal news, the Duke and Duchess have finally registered the birth of Prince George last week, citing Kensington Palace as their permanent residence. Prince William has also marked his first official appearance since the birth of his son this past weekend, playing polo with Prince Harry in the village of Ascot.

Loads happening in the royal sphere! We hope Kate is getting all the help she needs taking care of Prince George now that Prince William is back on duty.