It’s not easy to stand in front of a large crowd all the time without losing focus. Taylor Swift revealed that giant posters of her cat sometimes get her flustered. 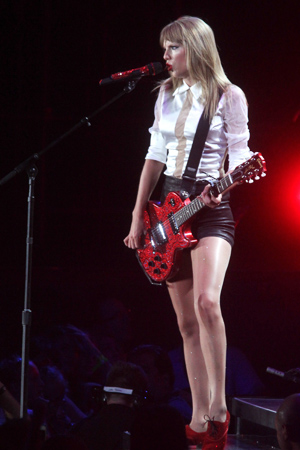 As much as Taylor Swift loves her fans and her adorable cat, Meredith, it turns out that the two worlds colliding proves to be too much of a distraction for the songstress.

In an interview with Rolling Stone magazine, Swift admitted that while, she appreciates the creativity her fans invest in concert posters to catch her attention, some of them are a bit too absorbing.

Taylor Swift will present at the MMVAs >>

“Sometimes I get really caught up in reading the signs, and if I get too caught up I will start to read the signs when I’m singing, so I have to make sure I’m only reading signs in musical breaks,” she told the mag.

“[The signs] are all pretty out there most of the time, which I like. There will be people who just make a giant, huge picture of my cat’s face, so big that it’s all I can see, and that usually gets my attention. My cat out there, giant photocopy of her, eight foot by eight foot.”

It turns out that the loveable feline is a big hit amongst Swift fans and has her own loyal fan following (including a Facebook page!). Bet you didn’t know that!

We hope Swift can find a way to stay focused during her performances, despite the billboards of her cat parading in the crowd. May we suggest encouraging fans to bring posters of dogs to balance the scales? Perhaps it will be a little less distracting.