Vampire Diaries actor, Paul Wesley, and his wife, Torrey DeVitto, have decided to part ways and are getting a divorce. They have been married for two years. 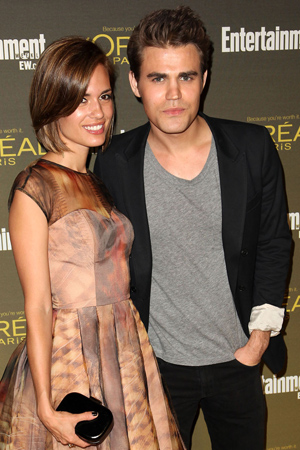 According to E! News, Vampire Diaries’ Paul Wesley and wife, Torrey DeVitto, are getting a divorce.

“Paul Wesley and Torrey Devito have decided to amicably split. They will continue to remain good friends,” the actor’s rep told E!.

The couple met and started dating on the set of the Killer Movie in 2007. They married in a private ceremony in New York City in 2011. DeVitto also starred in Pretty Little Liars and had a recurring role on Vampire Diaries.

Must have been strange sharing the set with your hubby, no? DeVitto has previously stated that not working with Wesley was a “blessing in disguise”, since working and living together may be “a little too much”.

Ian Somerhalder talks about his babies >>

Although once the couple started sharing the screen together, DeVitto changed her tune, saying, “I had such a great time working with [Wesley], and it was so amazing. I totally take back everything I said. We just have such a mutual respect for each other, and a similar work ethic.”

But maybe, she was right? Perhaps, working together proved to be too much. On other hand, now both, Ian Somerhalder and Paul Wesley are back on the market. Ladies, go get’em!

Lindsay Lohan is out of rehab!
Alyson Hannigan and husband will renew vows!
Evan Rachel Wood gives birth to a baby boy!