This is slightly unusual. Peter Sarsgaard revealed that he had no idea he would have a sex scene with Dakota Fanning in the indie film Very Good Girls. 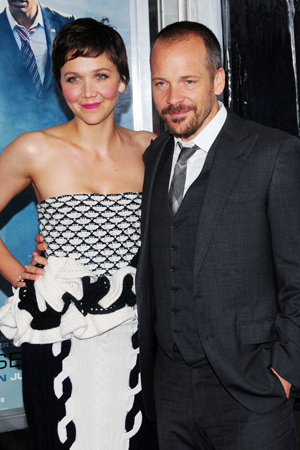 Peter Sarsgaard ‘fessed up about the awkwardness of filming a sex scene with 19-year-old Dakota Fanning in a movie directed by his wife, Maggie Gyllenhaal’s, mother! Surprise!

Naomi Foner directed Sarsgaard in her directorial debut, Very Good Girls, which tells a story of two New York City teenage girls who decide to lose their virginities over the summer. We’re guessing this is where Sarsgaard comes in?

“I hadn’t read it that carefully, so I didn’t realize I was going to be doing a sex scene,” he told E! News. “So that was the real surprise. Maggie and I kind of realized it at about the same time that I would be doing that.”

We wonder how the couple reacted to the realization. That’s a big detail to miss in a script!

“But you know, my mother-in-law’s asking me to be in a movie that she’s directing,” the 42-year-old actor continued. “I didn’t have the same scrutiny about the project I would have with somthing else. So I missed that part, and also the fact that it was with Dakota Fanning.”

Sarsgaard also confessed that since neither Foner nor Fanning had much experience filming scenes of this nature, so he had to take charge. That must have been slightly awkward, no?

“I said [to Dakota], ‘You’re going to lay down and I’m going to disappear out of frame and you’re going to make a face,'” the actor stated. “And I’m not going to be there while you’re pretending I’m having sex with you. We’re going to be on a closeup on you.”

There you have it! We even got a little inside look into how the filming process of sex scenes goes. We’re glad Sarsgaard was able to handle the unexpected scene with so much professionalism and that his wife didn’t mind!