After much speculation, the name has been revealed! Prince William and Kate Middleton have named their son George Alexander Louis. 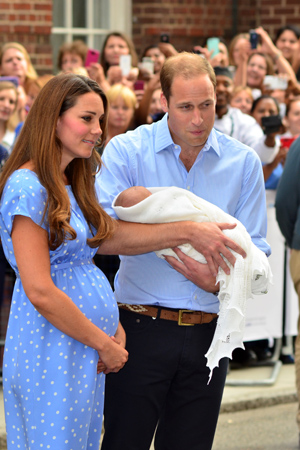 “The Duke and Duchess of Cambridge are delighted to announce that they have named their son George Alexander Louis,” the Clarence House tweeted this afternoon.

There has been widespread speculation of the possible names for the youngest royal; numerous bets have even been made. While royals are traditionally known strictly by their first names, most actually have three or four names. The Duke of Cambridge, for example, is actually named William Arthur Philip Louis.

George is a very historical name and a traditional choice. It is one of Prince Charles’ middle names as well as the name Queen Elizabeth’s father assumed upon his ascension to the throne (his full name was Albert Frederick Arthur George).

We think it is a wonderful name choice that pays respect to the other royals in Prince William’s family. What do you think of George Alexander Louis for the third-in-line-to-the-throne princeling?