Kevin Spacey was quick to show the flooding waters of Charleston, North Carolina, tweeting a photo of himself up to the ankles in rain water. 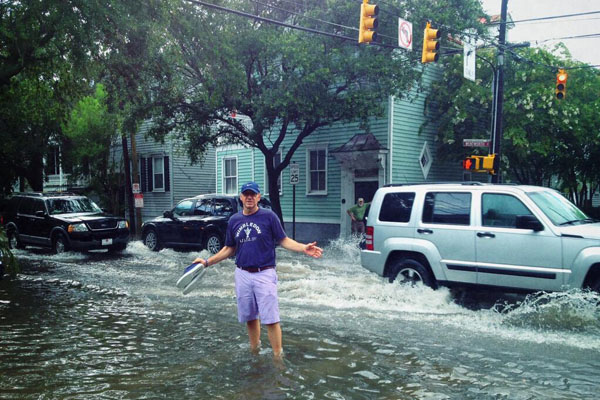 It’s an adorably funny photo but also a great example of the trouble many flooded cities find themselves in lately.

Kevin Spacey posted a photo of himself on Twitter, standing on Wentworth Street ankle-deep in water, from an eventful visit to Charleston, North Carolina, this weekend.

“I had a great time in Charleston, SC. Beautiful summer weather,” read the caption.

Heavy rains hit the downtown area of Charleston on Sunday, accumulating more than two inches of rain within an hour. The floods kept the city’s fire fighters and rescue workers afloat with plenty of work.

We’re not quite sure what brought Spacey to North Carolina, but we’re hoping he had a great time, despite the floods and the heavy rain.

In other news, the actor’s political drama, House of Cards, has picked up nine Emmy nominations. It’s leading the other digital series, with the most nods. We suppose, Spacey was just singin’ in the rain then!

Kelly Rowland rescued at sea!
Modern Family’s Jesse Tyler Ferguson got hitched!
Billy Ray and Tish Cyrus are back on