Robin Thicke knows what he’s doing. The singer hinted at a possible collaboration with Miley Cyrus for a future album and even video. 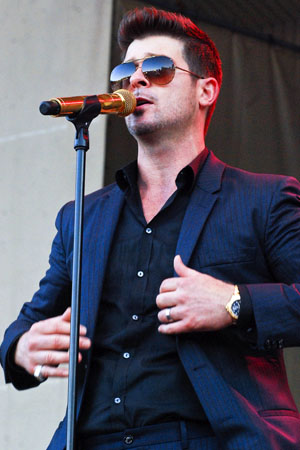 While Robin Thicke is climbing the highest of music chart heights, the singer recently revealed that there maybe a Miley Cyrus collaboration some time in the future.

He added, “Pharrell was working with Miley when Pharrell and I made ‘Blurred Lines.’ He was just finishing up with her when we started recording together.”

Thicke was also asked if he would consider having Cyrus twerk in his upcoming video (that’s kind of her gimmick now), and he seemed almost hopeful.

“Never say no,” the singer told iHeartRadio. “I’m not good at saying no.”

Nothing is official yet, but there’s a flicker of light for this crazy pairing. Meanwhile, Thicke’s single “Blurred Lines” is still dominating the charts across the globe and his album recently dethroned Jay Z’s Magna Carta Holy Grail on the U.K. album chart. So, he’s doing mighty well for himself!

What do you think of a Miley Cyrus-Robin Thicke collaboration?