What can’t this woman do? Evangeline Lilly showed off her first children’s book, –Squickerwonkers, at Comic-Con in San Diego. 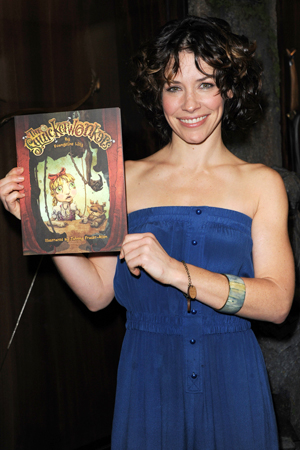 Is it odd that we are so excited about this—maybe more so than any child?

“Just finished my first official signing! Thank you all so much for your support! The line was CRAZY!” the actress tweeted.

Lilly worked with illustrator Johnny Fraser-Allen of Weta Workshop, the same conceptual design and manufacturing company that was involved in the making of the Lord of the Rings trilogy and The Hobbit.

“When Johnny and I sat down to create this book together we wanted to make a book that we would like to have read as children and that we would still enjoy as adults today, and that is exactly what we did,” actress stated in the Daily Mail.

The 33-year-old The Hobbit actress announced her intent to venture into children’s literature back in 2010 at The Late Late Show with Craig Ferguson, stating that she writes “everything across the board, kids’ stories and novels and scripts.”

Well, we like the sounds of this book! We’re not familiar with Lilly’s writing, but hey, why not give it a go? Will you be picking up a copy for a little one in your life?

Jay-Z’s new album is number one in the U.K.!
J.K. Rowling wrote a crime novel under a pseudonym!
Britney Spears’ new album is “to die for”