The other options did not pan out, so Rosamund Pike is now frontrunner for the role of Amy Dunne in David Fincher’s adaptation of Gone Girl, already starring Ben Affleck. 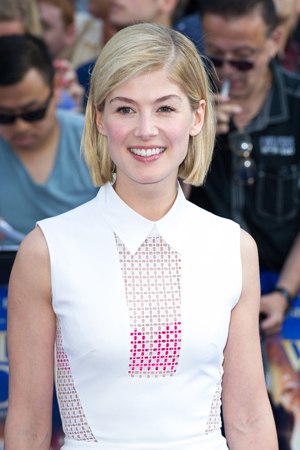 . . . And all the fair ladies of the land lined up to co-star with Ben Affleck.

We know that Ben Affleck will star as Nick Dunne in David Fincher’s film adaptation of Gillian Flynn’s twisted thriller, Gone Girl. But who will play his wife, Amy?

Based on Flynn’s best-selling novel, the film will follow Nick and Amy Dunne, whose married life begins to dissipate when Nick loses his job and the couple are forced to leave New York City for a small town. To make things worse, Amy’s sudden and mysterious disappearance leads to Nick becoming the prime suspect in the case. Dun, dun, dun! Or rather Dunne, Dunne, Dunne!

Ben Affleck in negotiations to star in Gone Girl >>

Several actresses were tossed into the mixing bag for the role of Amy Dunne, but none have been confirmed. Charlize Theron was an option, but she is not interested. Natalie Portman and Emily Blunt are also out of the running due to scheduling. Reese Witherspoon is on board with the film, but as a producer. Which leads us to the latest contender—Rosamund Pike. You may recognize the actress from Jack Reacher or even Pride and Prejudice.

Pike has not yet been confirmed, but fingers crossed! It may take a bit of time, considering that Fincher and Flynn are yet to pen the final draft of the script and the studio is yet to finalize a budget for the film as well, but shooting is scheduled to begin in September.

Hopefully, everything will come together at the last minute. Do you think Pike suits Amy’s character?