Adam Levine is taking a big step. The singer proposed to his Victoria’s Secret model girlfriend, Behati Prinsloo, over the weekend, after about a year of dating. 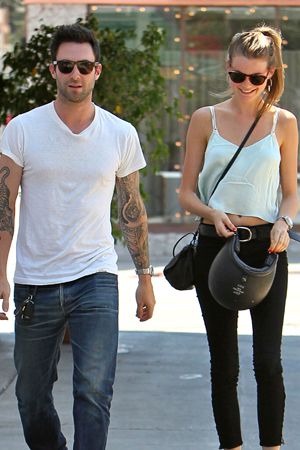 Well, ladies, this is the end.

Maroon 5 frontman, Adam Levine, is engaged to the Victoria’s Secret Angel, Behati Prinsloo, after the singer popped the question over the weekend.

Why is it always a model? We can’t compete with that, even in our minds!

Levine started dating the gorgeous 24-year-old model about a year ago, after his very public breakup from another model and long-time girlfriend, Anne Vyalitsyna. Prinsloo and Levine actually broke up several months ago but have gotten back together recently. And now they are engaged, so we can only assume that the reconciliation went really well.

Levine previously dated Vyalitsyna for about two years before she reportedly broke it off in 2012, although all official statements claim a mutual decision. This will be a first marriage for both Levine and Prinsloo.

Congrats to the happy newly-engaged couple! Perhaps this will be a model relationship. (Get it?). . . What do you think of the pairing?