Kelly Osbourne got engaged to her boyfriend of two years, Matthew Mosshart. The couple has been fighting off engagement rumours for months now. 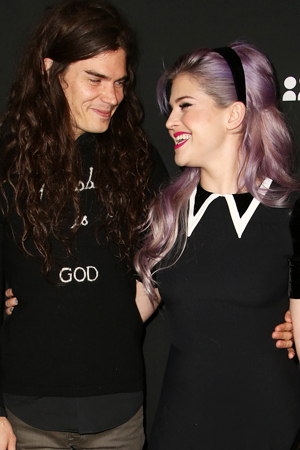 Well fellas, if you wanted to make a move, you are too late.

Kelly Osbourne is officially engaged to beau of two years, Matthew Mosshart. This finally puts all those pesky rumours to rest!

The couple met at Kate Moss’ wedding in 2011 and have been inseparable ever since. Osbourne has even confessed that Mosshart is “the one” on Good Morning America.

The unfriendly skies: Kelly Osbourne gets a shiner on airplane >>

“He just wants to love me, and I just wanted to be loved by him,” the star stated in the July issue of Cosmopolitan. “Every single other guy I’ve dated has wanted something from me. They’d call people I know and ask for favors. I’d have to say, ‘Trust me. Telling someone you are my boyfriend isn’t going to get you very far.'”

Kelly also gushed about Mosshart to Fabulous magazine : “He’s amazing. . . I don’t think I’ve ever really known what love is like before.”

How sweet is that? Osbourne has been previously engaged to Luke Worrall back in 2009, but the couple parted since.

We are overjoyed with the news, congrats to the happy newly engaged couple!