Is that why they call it a boy band? Kevin Richardson of the Backstreet Boys, and wife, Kristen, welcomed their second son on Wednesday! 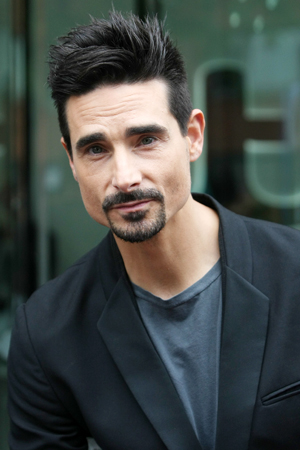 Well the shape of our hearts right now is a “K”, because Backstreet Boys, Kevin Richardson, and wife, Kristen Kay Willits, welcomed his second son!

“Special delivery! Another Richardson boy… At 3:05am Wednesday morning (7/10/13), Maxwell Haze Richardson decided to join the party,” the singer announced on his Facebook page. “He is a stout 9 lbs. 8 oz. / 23 inches long. Love! Love! Love!”

The couple married in 2000 at the Lee County’s Cathedral Domain in Kentucky. They welcomed their first son, Mason Frey, in 2007. They’re growing quite a beautiful family there!

Meanwhile, Richardson is busy at work with the Backstreet Boys; the band is releasing their first album since Kevin’s initial departure titled, In A World Like This. The record will go on sale on July 30, and the boys are going on tour starting August 2.

Congratulations to the happy parents! Mason must be so excited to have a little brother!

Suri Cruise called a “brat” by a paparazzo!
Halle Berry will get married this weekend!
Mariah Carey dislocated her shoulder!