August is a great month for movies, with everything from comedy to fantasy films hitting the big screen.

Related story Update your wardrobe for the season 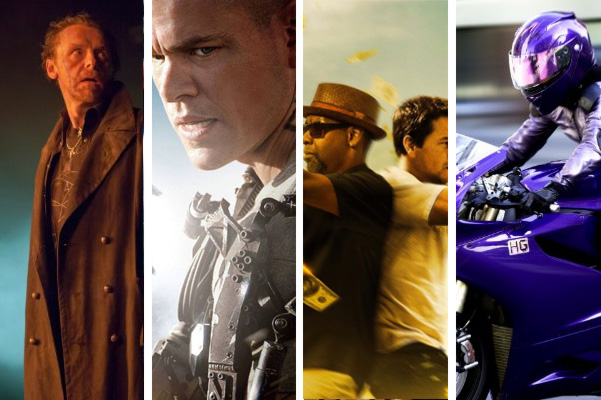 This month we’re excited about two British comedies: The World’s End and I Give It a Year. The guys behind Shaun of the Dead and Hot Fuzz are returning to the big screen with the science fiction comedy The World’s End, starring funny guys Simon Pegg and Nick Frost. I Give It a Year, by Borat and Bruno director Dan Mazer, stars Rose Byrne, Simon Baker, Anna Faris and Rafe Spall.

Other big names to look out for include Denzel Washington and Mark Wahlberg, who play rival agents in 2 Guns, Alec Baldwin and Cate Blanchett in Blue Jasmine and, of course, the boys of One Direction, whose concert film This Is Us is bound to be a hit.

Finally, Matt Damon and Jodie Foster go head-to-head in Elysium, Neill Blomkamp’s second feature film. The South African-Canadian director had us on the edge of our seats with District 9, and Elysium looks just as exciting. Check out the trailer here:

Lessons from the movies: What to do when technology attacks >>

Here are the movie releases for the month:

Lessons from the movies: Things you should never say in wedding speeches >>