Kevin and Danielle Jonas have announced that they are expecting their first child together. The two have been married since 2009. 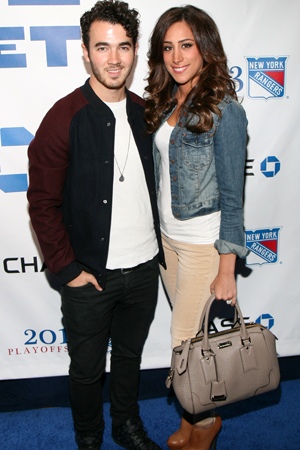 OK, now they can definitely start the biggest family band in history. . .

Kevin Jonas and wife, Danielle, are expecting their first child together! That’s right, another Jonas is on the way!

“It’s true @daniellejonas is pregnant! can’t even imagine how excited we are I can’t wait to share this with my best friend. I love you baby,” Jonas tweeted.

Jonas told E! News that he was “overjoyed” with the news and that it’s “the most exciting thing” in his life thus far. Fair enough; you don’t make little humans every day.

The lovebirds met in 2007 while vacationing in the Bahamas with their families. They were married in the Oheka Castle on Long Island, New York, in 2009. The couple have their own reality series on E! channel, Married to Jonas.

In the Jonas family, you can’t really announce a pregnancy without a flood of support from your brothers, which is shown through sweet, adorable tweets.

“Can’t explain how excited I am about this. I’m going to be an uncle! Congrats @kevinjonas & @daniellejonas!!” tweeted Joe.

And the hunky Nick chimed in with, “Can’t wait to welcome the newest addition of the Jonas family. Congratulations to my bro @kevinjonas & @daniellejonas.”

Everybody is excited! OK, anybody else thinking that they should name their child Jonas if it’s a boy and Jonah if it’s a girl? Jonas Jonas or Jonah Jonas. Oh, that’s awful, we take it back. Either way, congratulations to the parents-to-be!