Mariah Carey had to be rushed to the hospital on Sunday after dislocating her shoulder on the set of her new video “#Beautiful”. 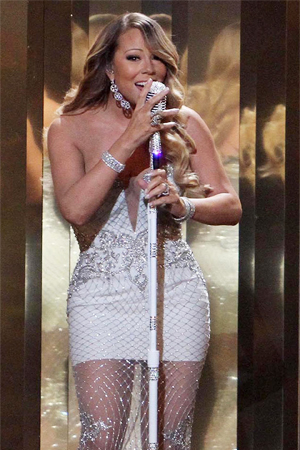 Mariah Carey was rushed to a New York hospital on Sunday night after dislocating her shoulder during a video shoot. She must have been really invested in that video…

“Mariah injured herself while filming a video for the remix of ‘#Beautiful,’ directed by her husband, Nick Cannon,” the singer’s rep told E! News. “She was taken to hospital late last night, where doctors reset her shoulder. She is fine and is recovering at home.”

Carey and hubby, Nick Cannon, have not commented on the incident and both have tweeted since. They think they can keep this a secret? Psht.

According to the New York Post, the singer had her shoulder reset at the Hospital for Special Surgery on the Upper East Side. A source told the newspaper that Carey may have sustained the injury from tripping and falling over her high heels.

Hopefully, someone will spill the beans on the cause of the shoulder dislocation. Hopefully. We’re glad Carey is recovering now and that it wasn’t more serious!