This is our favourite kind of announcement: Matthew Morrison has proposed to his long-time girlfriend, Renee Puente. The news broke at a ball in London. 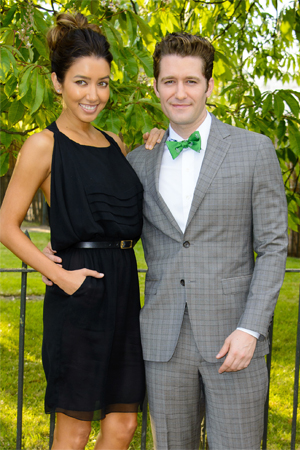 Well, there he goes. Matthew Morrison is engaged to his girlfriend of two years, Renee Puente. Un-break our heeearts… We kid! This is wonderful news; we just wanted to include some gratuitous lyric belting.

Can anyone else see the Glee star proposing through the “Thong Song”?

The engagement announcement was made at the White Tie and Tiara Ball in London last night by— wait for it — Elton John and David Furnish! We are slightly jealous about that.

Bidding farewell to the graduating class of >>

The news was followed by a Chris Martin (from Coldplay) and Elton John duet performance of “Your Song,” dedicated to the couple. OK, we are really jealous now.

This is a first marriage for Morrison and Puente. The 34-year-old actor was previously engaged to Chrishell Stause, but the couple broke it off in 2007.

Congratulations to the happy couple! We hope their wedding will be performed as a musical, complete with dance numbers, costume changes and award-winning lyrics.