In honour of Canada Day, we’ve rounded up some of the best handmade creations from Etsy that were inspired by a great Canadian actor — Ryan Gosling. Caution: Your eyes are about to be overloaded with awesomeness. 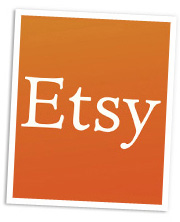 Best of Etsy
Because He’s one
hunky canuck
In honour of Canada Day, we’ve rounded up some of the best handmade creations from Etsy that were inspired by a great Canadian actor — Ryan Gosling. Caution: Your eyes are about to be overloaded with awesomeness.

You might be too old to hang a poster of Ryan Gosling in your room, but Teresa B. at Le Papier Gallery crossed stylish decor with drop-dead gorgeousness when she created this Ryan Gosling image printed on an antique dictionary page. Now you can display a piece of decor that’s both classy and good-looking! 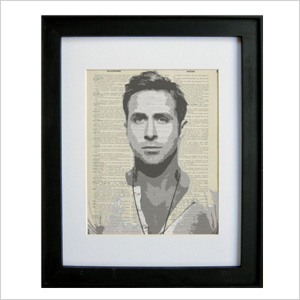 Teresa B.: I love the freedom of it the most. I always want to bring to life whatever ideas come to my mind. I think that’s what’s so great about Etsy. There are little constraints as to what you can imagine and [create] and be able to share with the world.

TB: My inspiration for this piece is, well, Ryan Gosling himself. I think he is the definition of what a sexy guy should be — super talented, extremely handsome and a genuinely nice guy. Who wouldn’t want him hanging on [their] wall?

If you’ve ever seen The Notebook and your heart melted at Gosling’s incredible portrayal of the lovable young Noah, then you’re familiar with the line, “If you’re a bird, I’m a bird.” And if that’s the case, then you won’t be able to wait to get your hands on this adorable Notebook-inspired bird print by Britt at Gus & Lula. 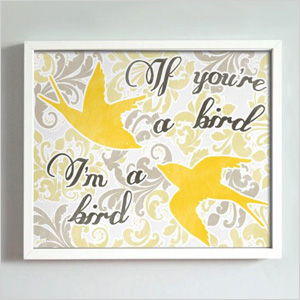 Britt: I love starting on a design, not knowing where it will go, and watching it evolve. There’s no planning and no rules, just playing around, making changes and, hopefully, ending up with something pretty.

B: The Notebook is such a touching story about two people who belong together despite their differences. I fell in love with this quote while I was in the process of adopting my two children from Ethiopia and knew that, despite the hurdles of the adoption process and the great distance between us, we belonged together as a family.

Want to take a little bit of Gosling with you wherever you go? When you put on these Ryan Gosling nail art decals by Shelby Robinson at NailSpin, all you’ll have to do is look at your hands to see his beautiful face! 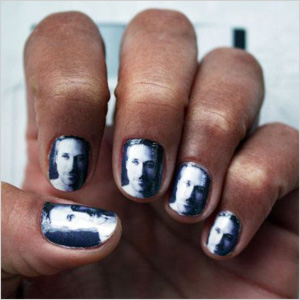 Shelby Robinson: If you would have asked this question a year ago, I would have had to laugh! I had no idea how to use Photoshop or Illustrator! I had to sit down and teach myself, which was a huge challenge in itself. Now I thoroughly enjoy having a design idea and easily being able to reproduce it digitally. The positive and silly reactions and feedback I get from my customers make it all worth it!

SR: Ryan Gosling is the epitome of the perfect man! He’s beyond hot, a very talented actor, down to earth and has a great sense of humour. I think every woman on the planet would want to be in his world! I created this piece because of the expression on his face. It just screams, “Hey Girl! I should be on your nails!”

Want to show how much you care or to say “thank you” to a friend whose love of Gosling rivals your own? Then this 100 per cent recycled card made by Andee Penner at Sew Dandee might be just what you’re looking for. It plays off the popular “Hey Girl” meme to create a card that’s sure to bring a smile to your loved one’s face. 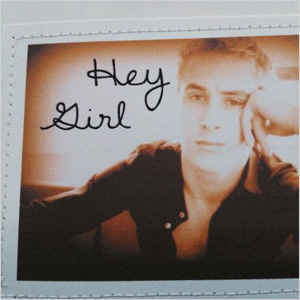 Andee Penner: I’ve got my hands in all kinds of crafty endeavours on a regular basis, so it all depends on the project at hand. Most of the time it’s the evolution of each project and how it changes as I work on it. For my cards, the phrases often just suddenly come to me like a light bulb over my head. I get so excited to get the first one made and hear the giggles from the first customer to read it! That’s the best part of my day, hands down.

AP: Well, I had no idea that I had such a huge crush on Ryan until the whole “Hey Girl” phenomenon happened. It just seemed like a logical card to add to my collection. I mean, who wouldn’t want to open an envelope and see that handsome face? Whether it be for someone’s birthday, someone needing some cheering up or a card for your sweetie, that face and phrase covers all occasions, if you ask me.

Ready to get your wee one on the Ryan Gosling bandwagon right from the start? Then check out this adorable “Hey Girl” baby bib created by Robyn at Delia Lane. Whether you get one for your own child or for a friend’s or family member’s, this hilarious accessory is sure to bring a whole lot of laughter and joy to anyone who sees it. 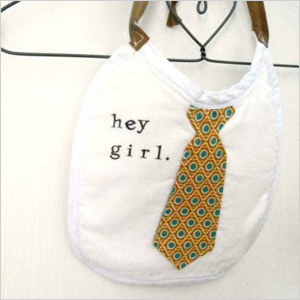 Robyn: Probably buying materials and designing projects around them. I heard another seamstress say she started her Etsy shop to support her fabric-buying habit, and I can so relate! There’s nothing like stumbling across some amazing material and spending hours daydreaming about how to best use it, then watching one of those dreams come to fruition and seeing something brand new emerge. The whole process is wonderful.

R: We were actually throwing a surprise baby shower for my cousin, who was expecting her fifth child — a boy. As you can imagine, she had most of the basics already, so it was kind of a “what do you get for the mom who has everything” situation. She has a great sense of humour — with five kids, you kind of have to — so I got the idea to make her a bunch of bibs with funny sayings on them. “Hey Girl” was the crowd favourite at the party.

Ryan Gosling is such a skilled actor; he excels at everything from light comedy to heavy drama. For a modern piece of artwork that brilliantly captures his mysterious character in the film Drive, check out this typography print created by Pete Ware at 17th and Oak. 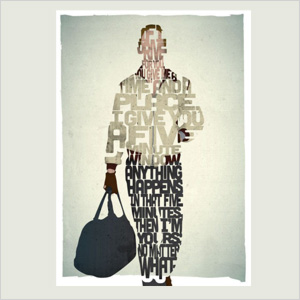 Pete Ware: I love being able to take a blank screen or piece of paper or canvas and, in a couple of hours, have a piece of finished artwork that all started with a small idea that popped into my mind. Also, the ability to push and challenge yourself really appeals to me. If I get an idea but don’t know how to go about creating it, I love the research and trial-and-error process involved in getting it to look how I want. It fills me with a strong sense of pride when I’ve finished a piece of work that I found challenging, and luckily for me, I’m presented with new challenges every day.

PW: This piece was actually a commission. I’m a fan of Drive and of Ryan Gosling. I think he’s a very talented man, so it was a great pleasure to work on this piece. I would have definitely gotten around to creating a Ryan Gosling print even if I wasn’t commissioned to do one, as he’s been in so many great films. I loved Lars and the Real Girl — that would make an excellent print.