Even comedians can’t travel safely anymore! Russell Brand has had to cancel his Middle Eastern comedy tour after several threats were made against him. 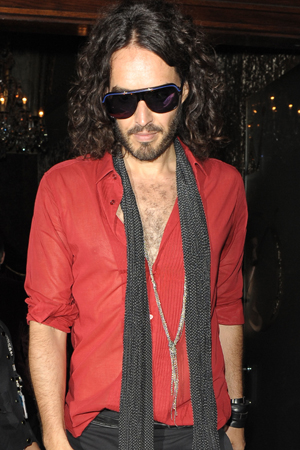 Not everyone knows how to have a laugh.

Russell Brand was forced to cancel shows in Lebanon and Abu Dhabi after his safety could no longer be guaranteed due to extremist groups’ threats.

“Those gigs have been banned, pulled because of threats from extremists that, if I went there, there would be problems,” Brand told BBC’s Radio 5 Live.

The comedian admitted that promotional material for the Messiah Complex World Tour may have had a role in angering several extremist groups.

Russell Brand is your volunteer! >>

“The image, by the brilliant artist Shepard Fairey, depicts me as looking a little Christ-like…so there’s an indication that it might be offensive,” Brand told the station. “If you are in some sort of fundamentalist group and Google my name and watch a few things on YouTube, you might just think ‘don’t bother having him here.'”

Yup, that might do it. Many religious groups do not look favorably on re-creations of sacred images, especially in a comedy show. So, Brand is now skipping the entire Middle East and moving on to North America.

Brand’s tour will hit Canada in August, so if you’d like to catch his show (and are not easily offended), grab them tickets!