This has been the most exciting wait for a royal birth! Prince William and Kate Middleton have welcomed their child. 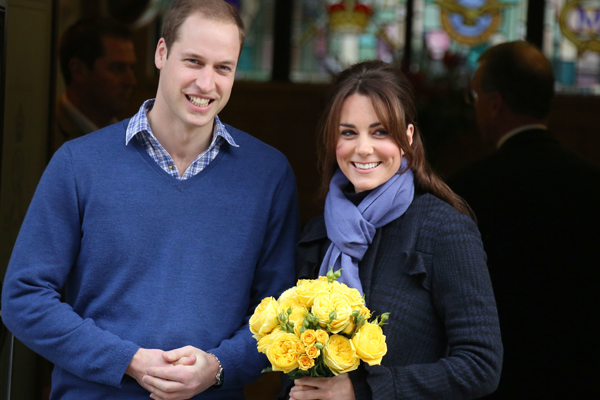 The biggest royal announcement of the year hath arrived!

Prince William and Kate Middleton welcomed a baby boy today (future king, everybody!) at St. Mary’s Hospital in West London, weighing in at 8 pounds, 6 ounces. The duchess and baby are doing well and will stay in hospital overnight. The Duke of Cambridge issued a statement, saying the couple “could not be any happier.” Get those party crowns out!

A bulletin signed by the queen’s gynecologist, Marcus Setchell, was taken by a royal aide from St. Mary’s to Kensington Palace under police escort. The official document stated:

The Kensington Palace press release stated that Prince William, the Duke of Cambridge, was present at the birth.

“The Queen, The Duke of Edinburgh, The Prince of Wales, The Duchess of Cornwall, Prince Harry and members of both families have been informed and are delighted with the news,” the statement from the palace read.

The Prince of Wales and the Duchess of Cornwall issued a separate statement, congratulating the royal couple and announcing that they are “overjoyed at the arrival of my first grandchild.”

“It is an incredibly special moment for William and Catherine, and we are so thrilled for them on the birth of their baby boy,” he added.

“Grandparenthood is a unique moment in anyone’s life, as countless kind people have told me in recent months, so I am enormously proud and happy to be a grandfather for the first time, and we are eagerly looking forward to seeing the baby in the near future.”

U.K.’s Prime Minister David Cameron was one of the first to congratulate the royal couple via Twitter, stating, “I’m delighted for the Duke and Duchess now their son has been born. The whole country will celebrate. They’ll make wonderful parents.”

The duchess arrived at the hospital at 6 a.m. local time, after going into labour this morning. She was accompanied by her husband, Prince William. Per tradition, an easel with the announcement is posted in front of the press once a royal baby arrives, but this time an official statement was released prior to the reveal of the doctor-signed bulletin.

The Duke and Duchess of Cambridge announced the pregnancy back in December, and it has not been an easy one. Middleton was admitted to King Edward VII’s Hospital for treatment of acute morning sickness (hyperemesis gravidarum), where she remained for three days and which forced the couple to announce the pregnancy sooner than initially planned. The duchess’s condition has since reportedly improved.

If you remember, Queen Elizabeth issued new letters patent in January, permitting all the duke’s children to enjoy the princely title, as opposed to just the eldest son. Not too shabby for this little one!

We are overcome with joy and excitement; this must have been the most-anticipated birth in history. Congratulations to the entire royal house!

More on the royals