After three years of marriage, Glee‘s Jane Lynch and wife, Lara Embry, have decided to get a divorce. Lynch revealed the news through People magazine. 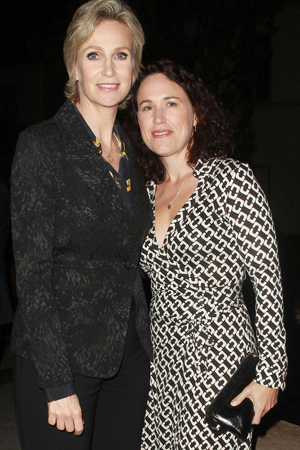 We don’t think anybody is excited about this… Jane Lynch and wife Lara Embry are getting a divorce.

The 52-year-old Glee actress told People magazine, “Lara and I have decided to end our marriage. This has been a difficult decision for us, as we care very deeply about one another. We ask for privacy as we deal with this family matter.”

The couple met in 2009 at a fundraiser in San Francisco and tied the knot in a small ceremony in 2010 in Massachusetts, one of the few states permitting gay marriage.

We hope the two of them remain friends despite the divorce. Lynch is currently starring as Miss Hannigan in Annie: The Musical on Broadway. The show runs until July 14.

John Malkovich saves a man in Toronto!
Justin Bieber kicked out of nightclub
Sarah Jessica Parker is launching her own shoe line!