He didn’t get to go to a party this weekend. Justin Bieber was shown to the exit door after trying to sneak into a nightclub despite being underage. 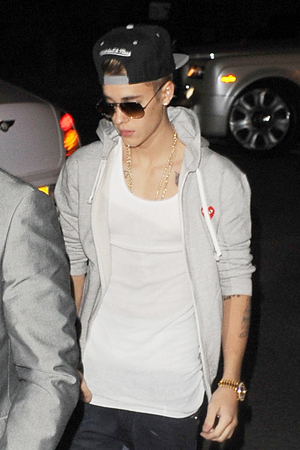 Nobody escapes the long arm of the law… Dun dun duuun.

Justin Bieber was courteously escorted out of Lure nightclub on Saturday, during an attempt to sneak into the Toxic Luau Beach Day party.

Why was kicked out? Because he is underage, of course!

Prior to the event — attended by fellow celebs, like Quincy Jones, Christina Milian and Reggie Bush — the proprietors notified Bieber’s crew that the pop singer will not be allowed in, but he tried to slip in anyway.

“Someone from Justin’s team had come earlier in the day and told the club that he would be showing up. The club told him they wouldn’t let him in because he’s not 21,” a source told E! News. “Bieber came anyways and tried to sneak in through a back door.”

How does a celebrity sneak in, really? Their faces are more recognizable than McDonald’s golden arches, and they always travel with an entourage — they’re not exactly stealthy. In Bieber’s case, it was rapper Game who sold him out, albeit accidentally.

“The Game was on the mic at this point and saw Bieber trying to get in and shouted that Bieber was on his way inside,” the source continued. “That’s when security saw him and escorted him out immediately. He left right away. He seemed really embarrassed.”

The 19-year-old star will just have to wait another two years, unless he’s up in Canada. We’re glad the nightclub didn’t bend the rules for Bieber, although he gets extra points for trying to sneak in.